It’s been a couple of weeks — time flies when you’re smashing out that next book — since I attended my 2nd Writers Conference of the year. And it was a big one. Maybe the biggest…Buchercon!

*An unpaid intern whispers in my ear*

It was the biggest. Bouchercon, named after Anthony Boucher, a writer and a big old cheerleader of mystery. His name will come up again in this post. Well over a 1000 people registered for a four day extravaganza of panels! interviews! drinking! meeting people! more drinking! and book buying!

And this year’s conference was in Minneapolis! A city close to my heart. You can check out what went down at the last conference over here.

So young, so innocent, at his first Bouchercon…

Most of the day could be spent going from panel to panel, seeing amazing authors talk about their books, about craft, and just being damned entertaining. (I’m looking at you, Charlaine Harris.)

And there were panels for everyone. From Cozies to Thrillers, from Indie authors to How To Talk To An Agent, from Espionage to PIs. A plethora of panels.

But, most of the action took place at the bar. 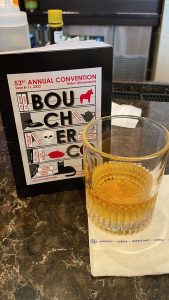 I promise, Officer, it was just one drink

And by action, I mean, people talking to each other. Crimes may have been discussed, but all of them were theoretical. I hope. On my part it was.

On the Saturday night of the conference, as I was talking with a writer I hadn’t seen in ages — thank you, pandemic — two guys from South Dakota stepped into our conversation. They were literal cowboys, in Minneapolis for the the football game with next day. And they were mystified about what we were all doing here.

“Writers?” They asked. “Tell us a story!” They demanded.

OK, dear reader, you should also know, these guys were drunk. Der-ruunnnnnk. Needless to say, we did not tell them any stories as they kept interrupting with their own lives. One asked, “Do you know how much my father is worth? With all the land and the cattle?”

We all shook our heads, because, well, it was rhetorical.

“Five million dollars. Five.” And he held up one hand — while gripping two beer bottles in the other — just to make sure I knew how much his father is worth. “I’m not worth anything.”

“Well, you’ve come to the write conference to solve that problem. You could kill him.” We brainstormed for a hot second and came up with several ideas on how he could get his father’s money.

His mouth hung open and he looked at us and said, “I can’t kill my father.”

Which is good to know, I’d hate to be an accessory after the fact. And with that, we bid them adieu.

*crosses fingers that no ranchers were murdered in the last week*

And what would a writing conference be without a bookstore…!? 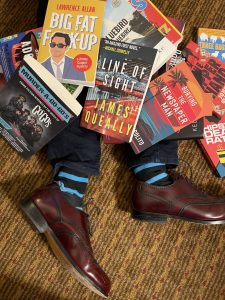 I may have bought too many books…

The bookstore was managed by Once Upon A Crime, an indie mystery bookstore in Minneapolis. They were fabulous and happily took all of my money.

The conference climaxed on Saturday night with the Anthony Awards — see, I told that name was gonna come up again. The Anthony is one of the big awards in Mystery and Crime and all the nominees were fab.

Here’s a link to the list of nominees and winners: find a great read!

A shell of a man…

Regardless, I can’t wait too do it all again next year.